Trinidad Carnival truly is sweet for days! Learn why many call it the ‘Mecca of carnival culture’

As far back as I can remember, my family has celebrated carnival. Regardless of where we’ve lived, Trinidad & Tobago, our homeland, has always been apart of our lives and carnival culture is at the essence of that existence. Trini’s often say that once the carnival bug hits your veins, it’s virtually impossible to let it go and I couldn’t agree more.

Right around late summer of every year, we start to “catch it” as the anticipation for the next year’s festivities grow. From band launch season (where Mas bands reveal their themed costumes for the year) through the Christmas holiday, Trinidadians, lovers of Soca music and carnival revelers around the world are steadily planning, planning and planning some more patiently waiting for February on the twin island to arrive. Maybe it’s the many lead up carnivals throughout the globe such as Notting Hill, Brooklyn’s Labor Day, Toronto’s Caribana, Cropover in Barbados and of course Miami carnival in late October that give us an early taste of what’s to come, but Trinidad is steadily on the mind. It is after all, the mecca of carnival and the greatest street party on earth! 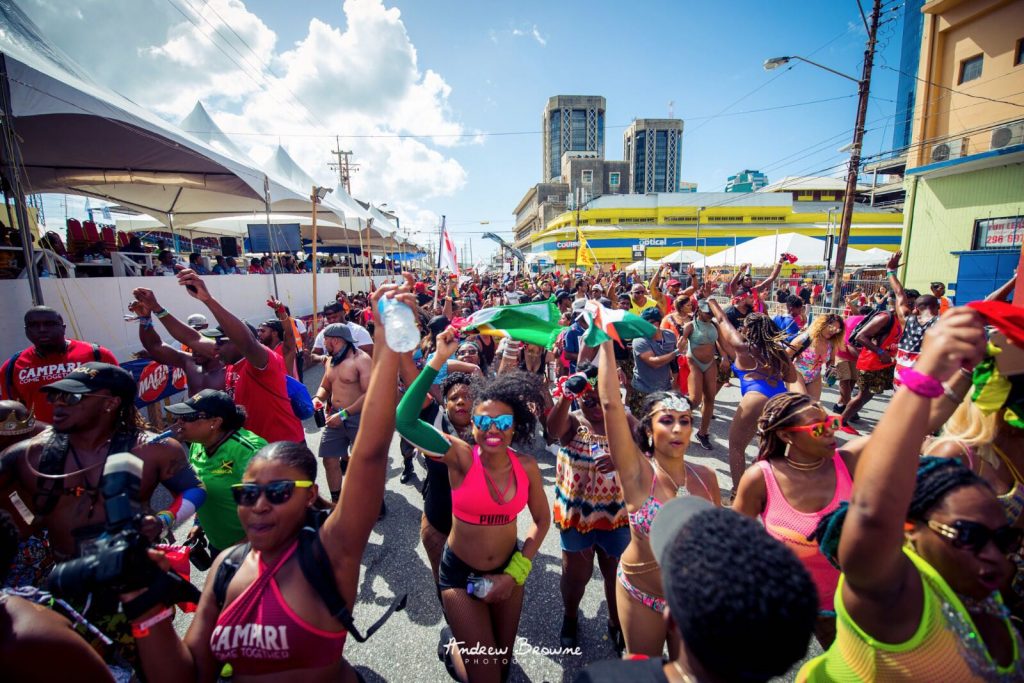 Carnival Rogue Mas Band getting ready to cross the stage in downtown Port of Spain. Photograph by Andrew Browne

As the time draws closer, you and your crew have already begun to devise the plan: What band are you all playing in? What section? What fetes are you all going to? What day you’re flying in? Where is the crew staying and is transportation coordinated? And finally, are you all going to Tobago for the cool-down/last lap after? Once that’s all figured out, the agony of having to wait months to actually get there kicks in, especially as the Soca artists begin to tease you with the latest releases for the upcoming season (here are a few of my favorites from this season). 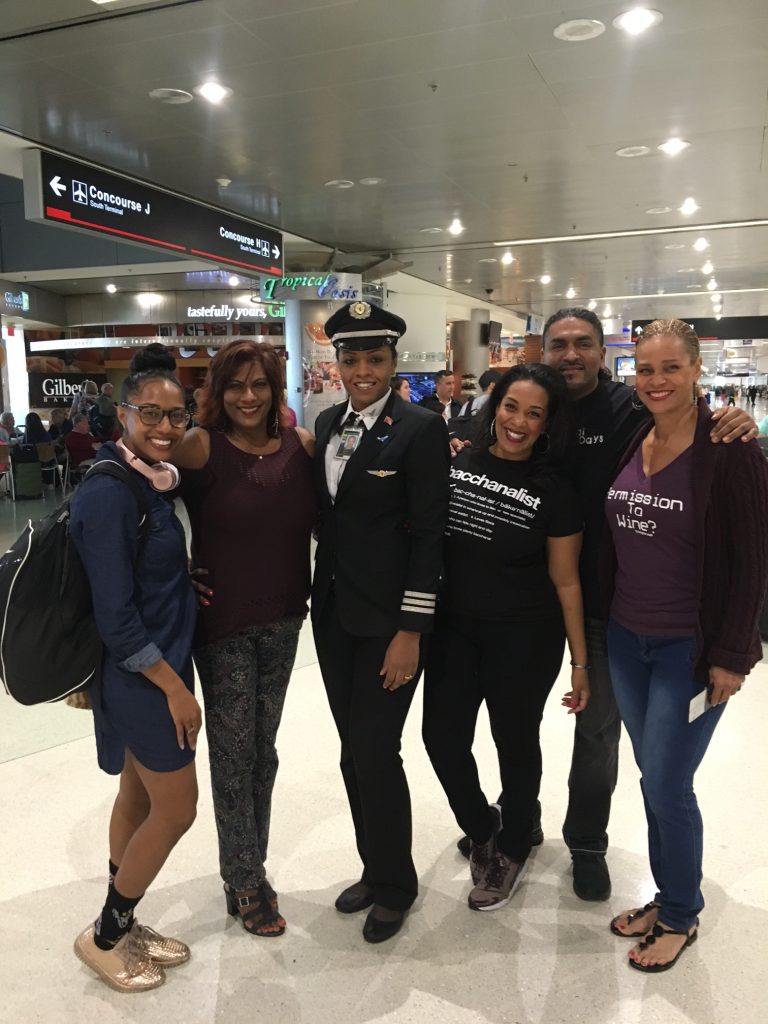 #MyCrew and I had the pleasure of meeting Trini Captain Kesia Brown who got us to T&T safely. (my T-shirt by @passportCaribbean).

Once the moment arrived, the vibes were just as sweet as I imagined they would be. We literally touched down in Piarco International airport to the sounds of Kes The Band’s latest groovy tune “Hello” welcoming us with a steel pan procession in the courtyard. One quick stop to duty fee to stock up on Scotch, then to B-Mobile to grab a phone card and we were ready for the action!

This year, I teamed up with both B-Mobile and Bliss Mas Band to highlight #MYCarnivalExperience and share the unforgettable moments with you. Hopefully the next time you make travel plans, Trinidad carnival is not only on your radar, but becomes apart of your agenda because there truly is no place like it on earth quite like T&T. Now let’s get started on my experience so that you can get a snapshot for a future carnival jump up of your own. 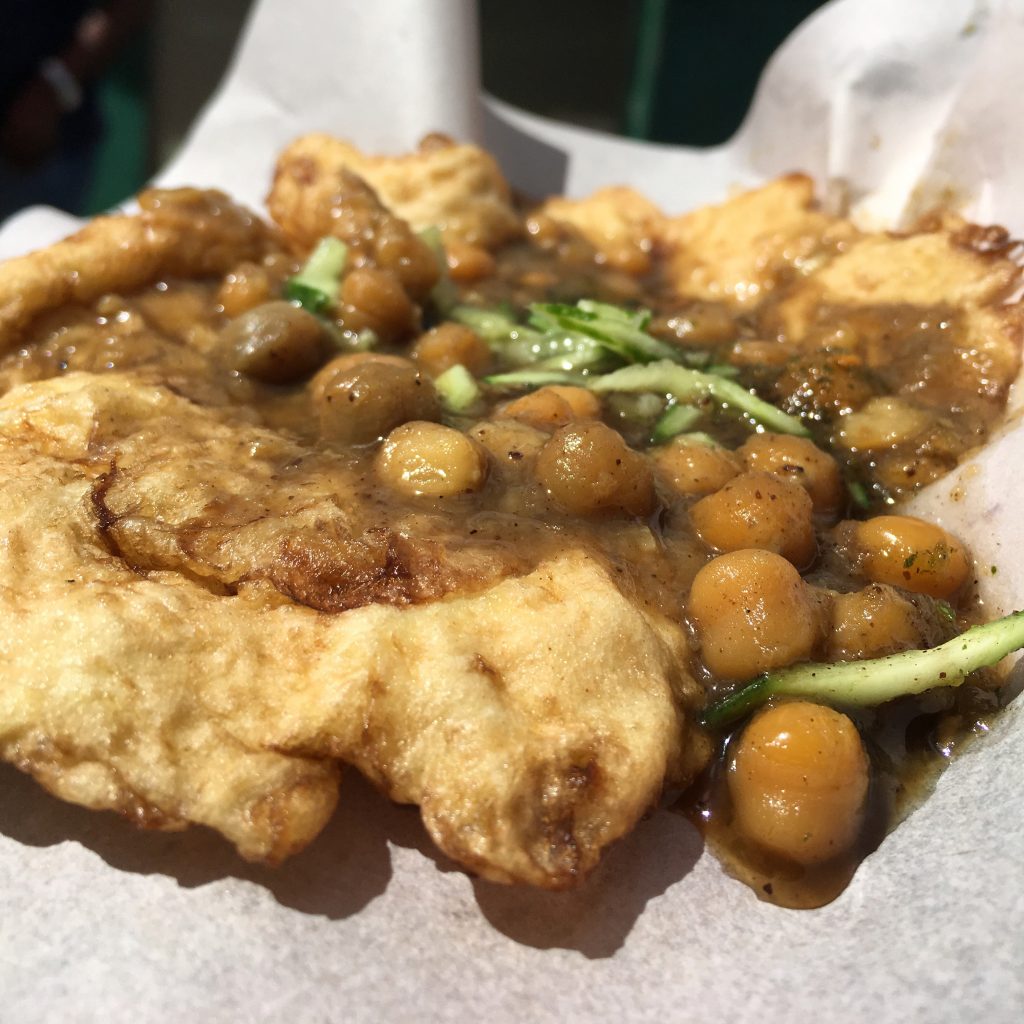 When I touch down, a ‘doubles’ is always the first order of business. Two perfectly fried patties of dough known as “barra” topped with seasoned chana (chick peas) piled with fixings like tamarind, cucumber and peppa sauce make for the most delectable Trini street food dish known as a doubles. It’s impossible to have just one and for any visitor a doubles is a must. Nothing washes a doubles down quite like a fresh cut iced coconut. You can spot vendors along the highway and throughout downtown Port of Spain’s Queens Park Savannah. Many vendors even have scotch readily available to concoct Trini’s national drink, a Scotch and Coconut Water on the rocks. 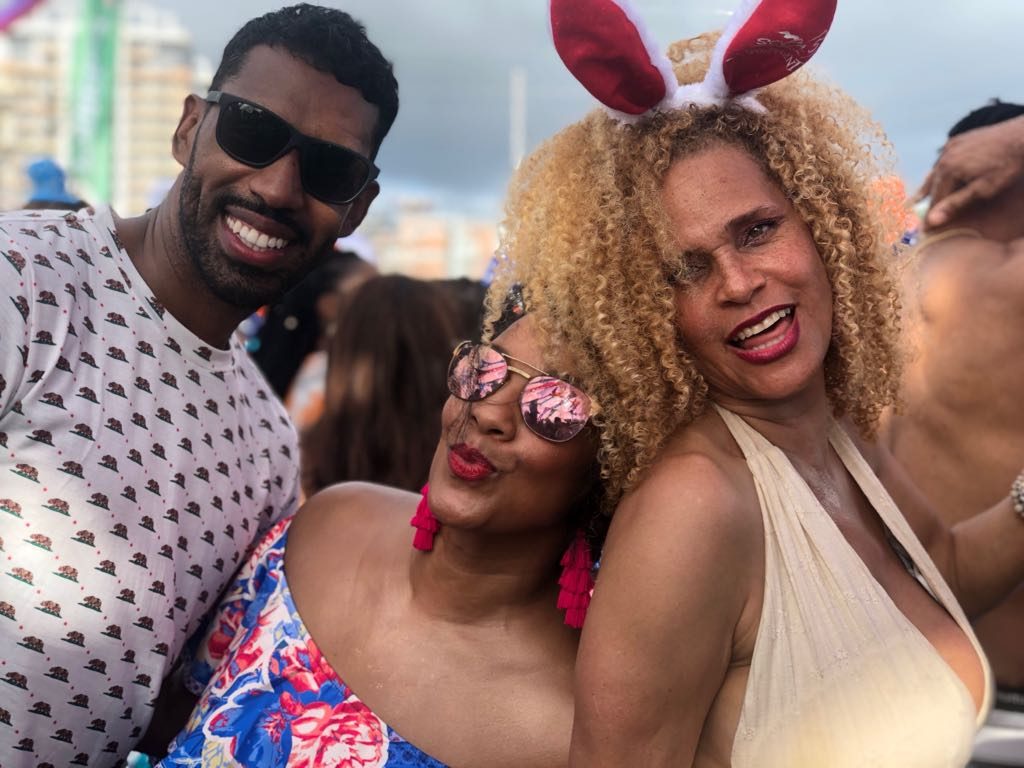 On to the Fetes. For many friends who always inquire about my carnival adventures, they can’t seem to wrap their heads around going to a party that starts at 3a.m. and ends at 11a.m. then a quick cat nap before heading off to the next one. ‘Vanessa, how is this possible and when do you sleep’ are always the two most asked questions. The answer is simple- you don’t. Let’s be clear- Trinidad Carnival is not the place you come for a relaxing vacation- it is exactly the opposite. But luckily Tobago, its sister island offers those pristine beaches, relaxing villas and bungalows should you fancy that vibe. Trinidad on the other hand is straight vibes and non-stop bacchanal right through, so mentally prepare yourself for lack of sleep mixed with incredible energy. The all-inclusive fete experience is a huge part of what makes the culture so special. Each with their own signature theme and style, carnival fetes bring the island to life during the season. You’ll end up befriending your neighbors, reconnecting with old friends and taking a wine on a stranger is not only common, it’s totally acceptable. 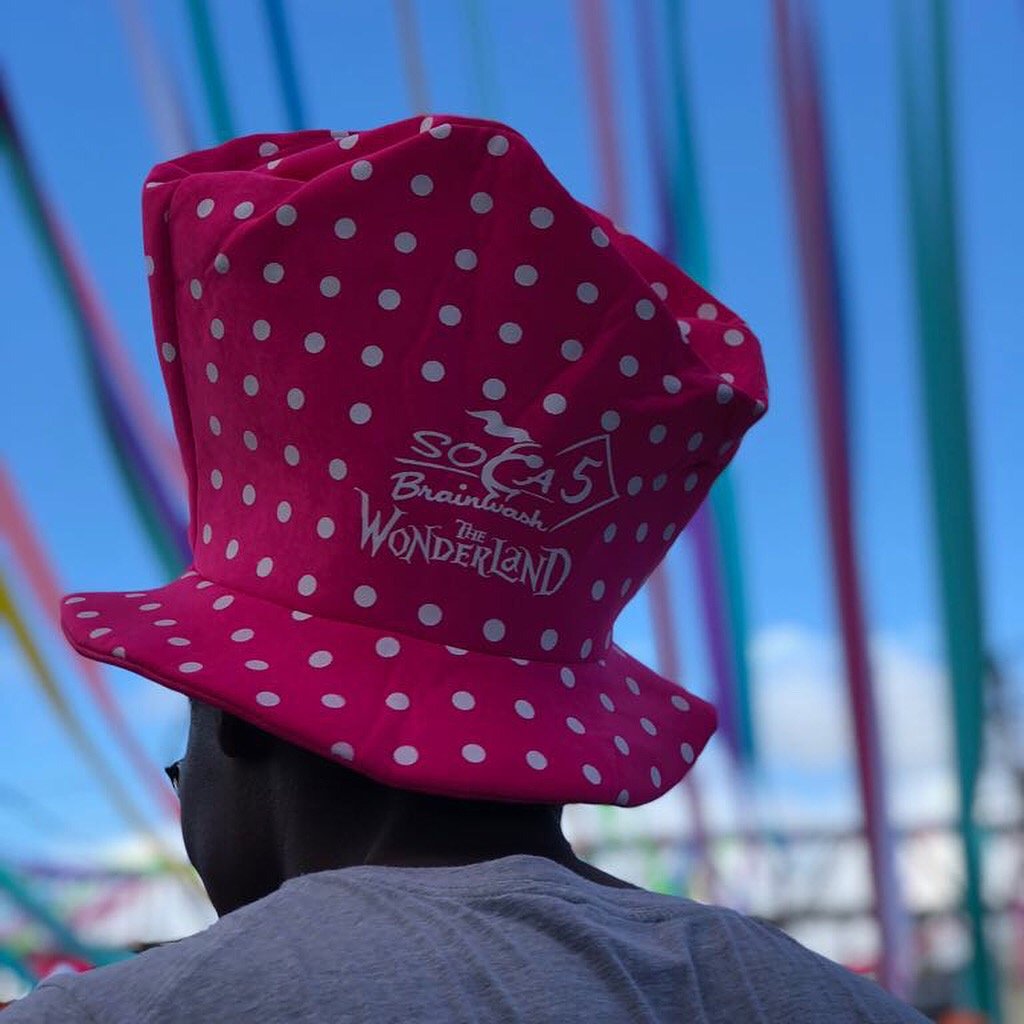 One of the most popular All-Inclusive Fetes of Trini carnival is Soca Brainwash. DJ Private Ryan takes you on a themed adventure for 6-hours of non-stop pumpin with the hottest international Soca DJ’s.

This year, I attended 6 fetes during my carnival week- make a note of these for your next visit as they are not to miss: A.M. BEACH, SOCA BRAINWASH, CANDY COATED COOLER FETE, BEACHOUSE, SOAKA STREET PARTY AND VALE VIBE. (A few shots below). 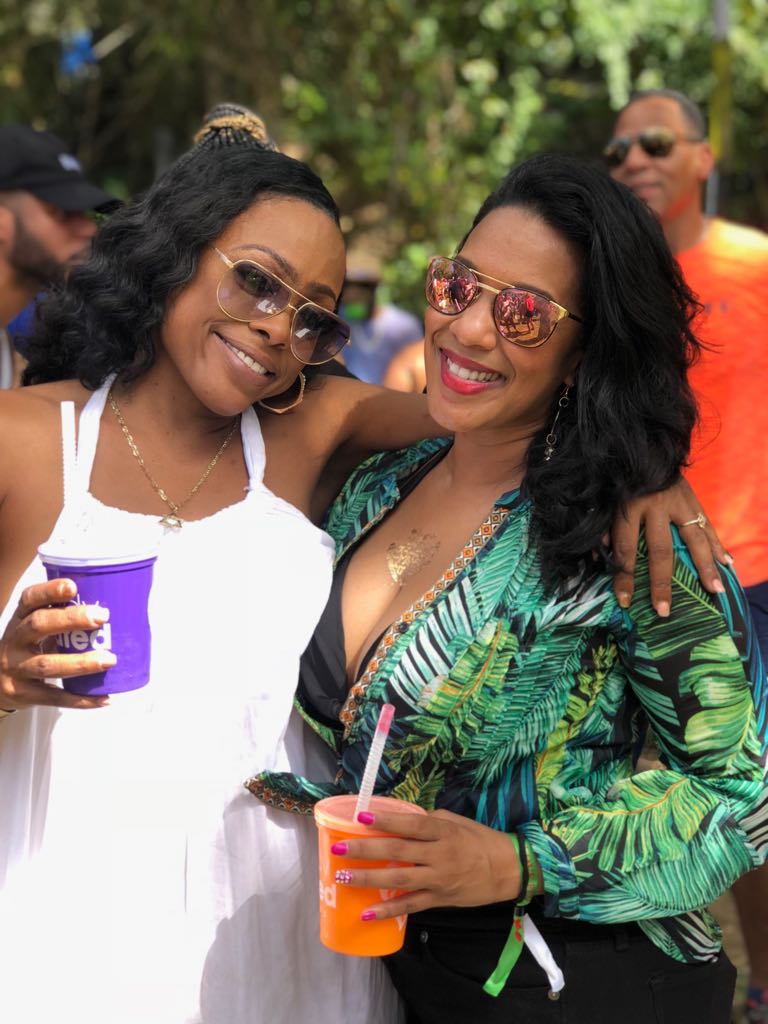 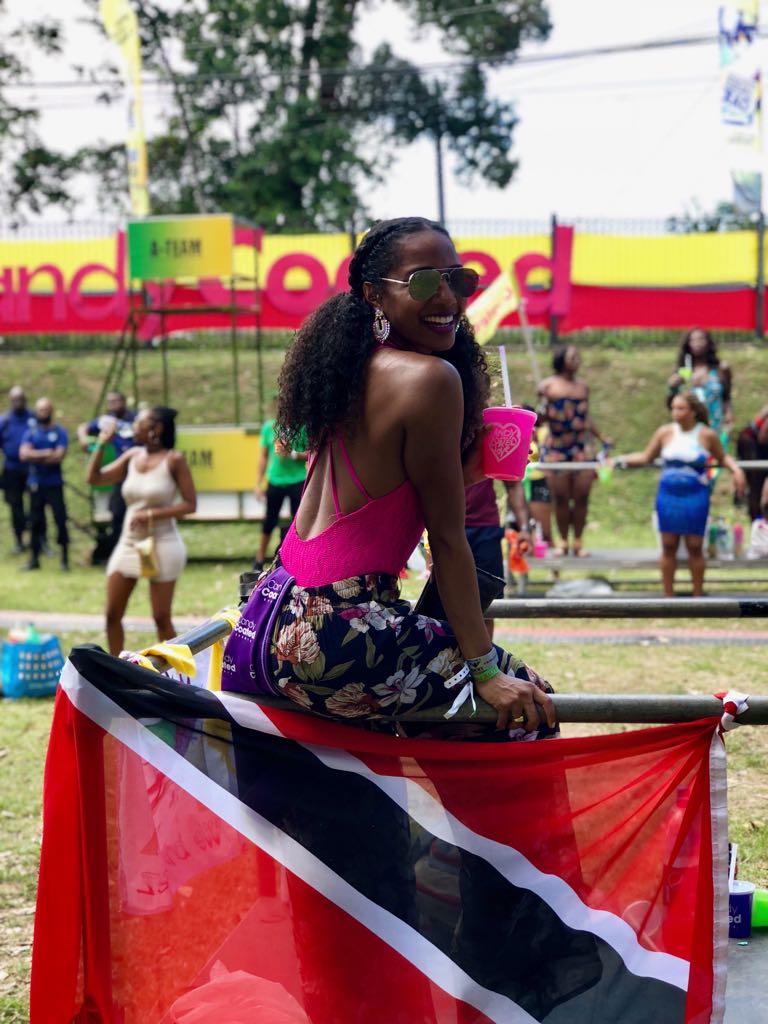 Baby sis taking in the vibes.

With so many fetes to choose from it really just depends on your crew, how early you scout tickets and of your course budget. Important note: many of these fetes are ‘all-inclusive’ which means they include food and drink, so they will set you back at least a hundred dollars; be prepared to have a fete budget set aside.

If you’re not a feter type, you can still capture an authentic carnival experience more true to it’s ancestral past. Here are a few ‘must attend’ events to earmark: 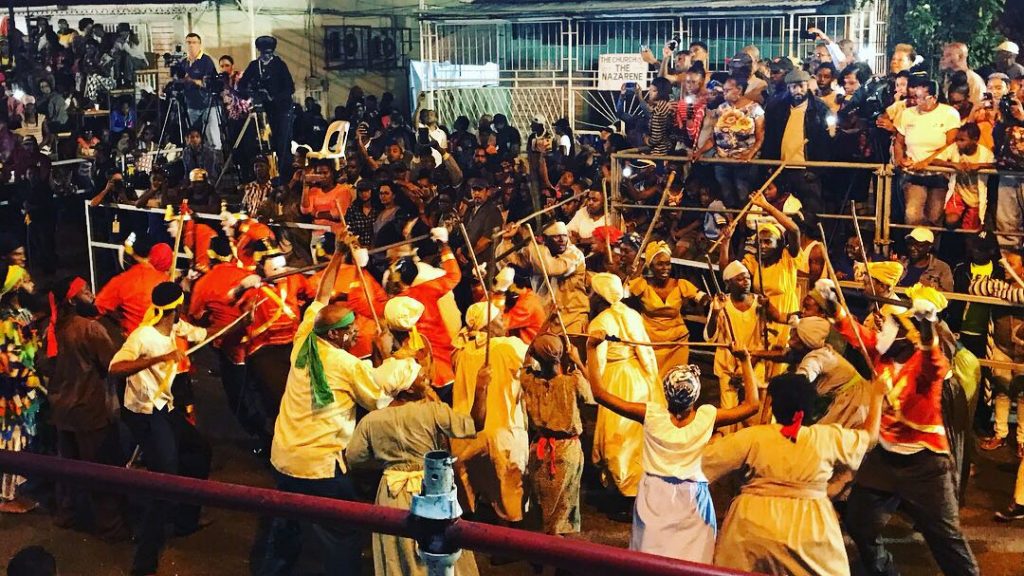 Vanessa and Dane Gulston of All-Stars Panorama getting a quick session in the panyard before carnival Saturday.

Imagine watching the sunrise with 5000 friends and strangers to the sounds of Bunji Garlin’s thumping classic Differentology while you’re completely covered in cocoa. This is Jouvert– It literally means the darkness before dawn and as the sun rises you are born anew (hence when carnival Mas officially begins). If there’s one event I recommend that you experience, it is JOUVERT- so take my advice and take a jump when you can! Jouvert symbolizes: no judgment, no discrimination, no class, and no race. It is the definition of oneness, freedom and pure exhilaration.

And FINALLY, we arrive at The Mas… 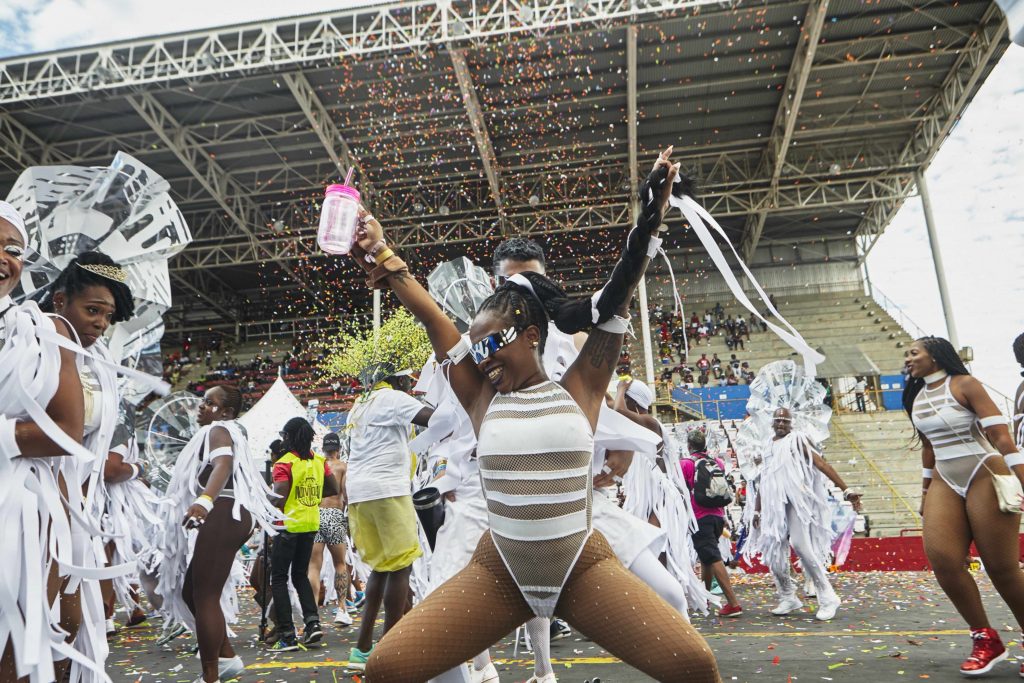 After the street food, the fetes, the panorama and the Jouvert, Carnival Monday and Tuesday finally arrive. These are the two days of the year when no boss, no emails, no arguments, nothing and I mean nothing can come between you and the road! It’s your chance to let yourself go, RULE THE ROAD and soak in the tradition alongside the hundreds of thousands who traveled to the island to do the very same. I was lucky enough to find vendor Carnival Kicks  (owned by fellow carnival reveler Farrah Ragoonath) that had every accessory needed, from stockings, to eye gems, glitter and boots to make preparation for the road easy and seamless. All of the planning had paid off and now comes the time to simply let the music take you and ingest the energy of the carnival. 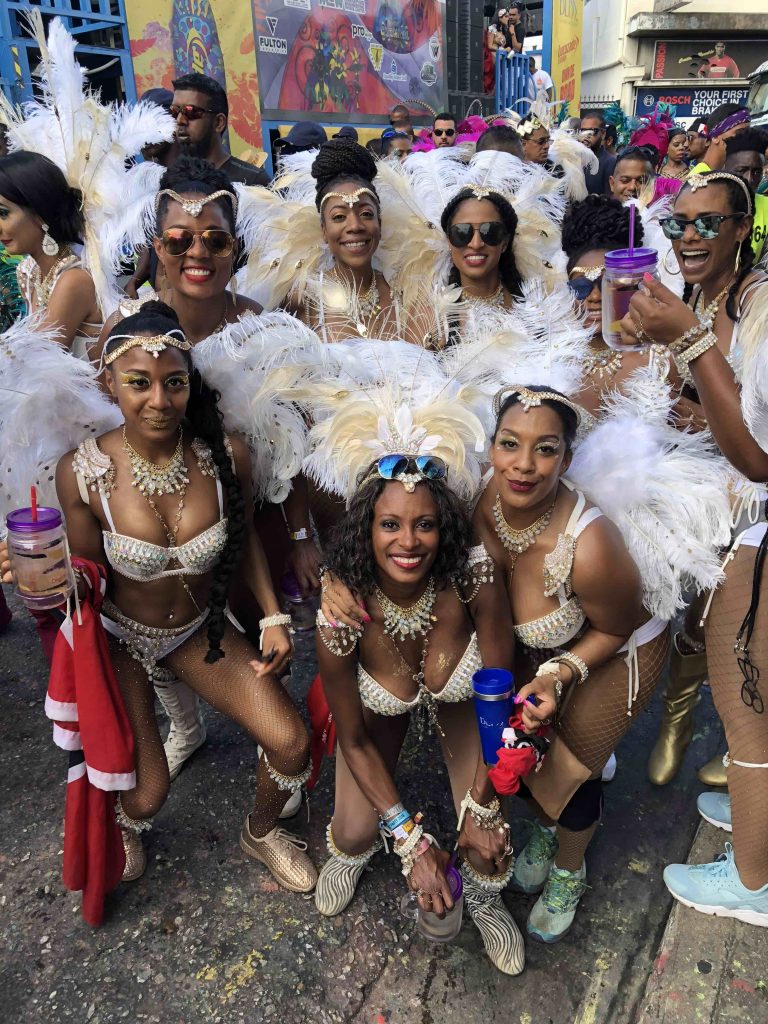 Carnival is your crew! The Lumiere Ladies (our section in BLISS) after we crossed the stage on Carnival Tuesday

Crossing the stage for many carnival revelers is the highlight of the experience as it gives us a chance to show off that famed costume they were so eager to put on. Layered with feathers and adorned with jewels we descended on the Queens Park Savannah stage or the SocaDrone stadium stage to have our moment. The stage is a special place. You almost get transported, if only for a few moments to your own virtual reality, with Soca music pumpin, music trucks flanked on all sides, confetti falling and pure bliss all around, you take to the stage and RULE IT. 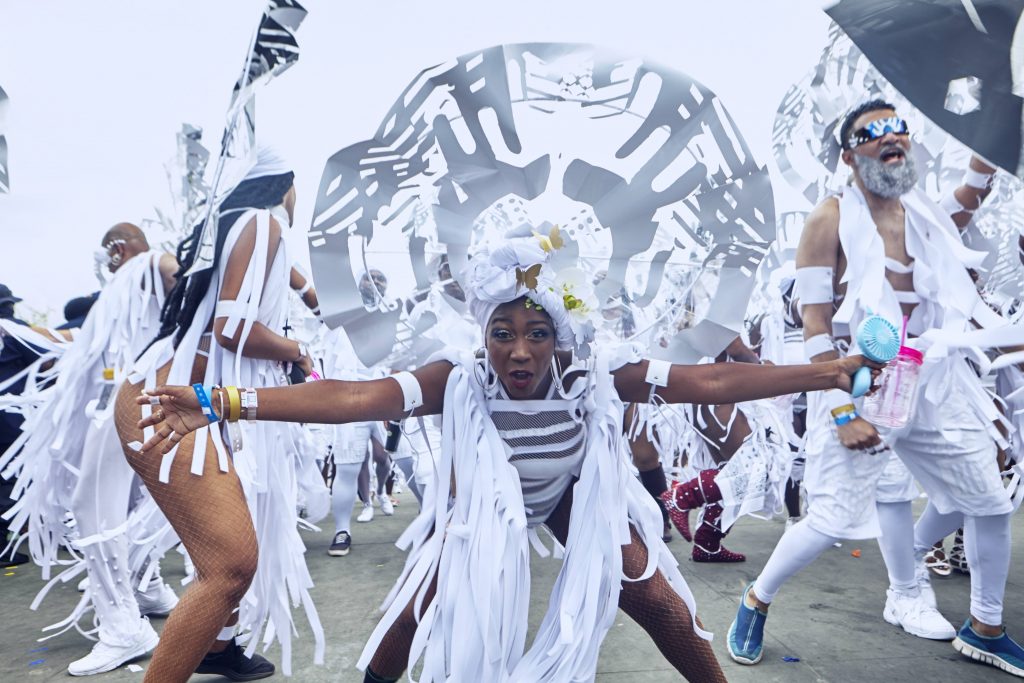 A Masquerader finally gets her moment to cross the stage at the SocaDrome and rule the road in The Lost Tribe mas band. (Photo by Marlon James).

The Lost Tribe and BLISS MAS band both crossed the SocaDrome this year on Carnival Tuesday. Hopping between bands, I had a chance to take in the vibes with both groups. (Below are a few pictures I captured from of the beautiful costumed ladies of BLISS on Carnival Tuesday). 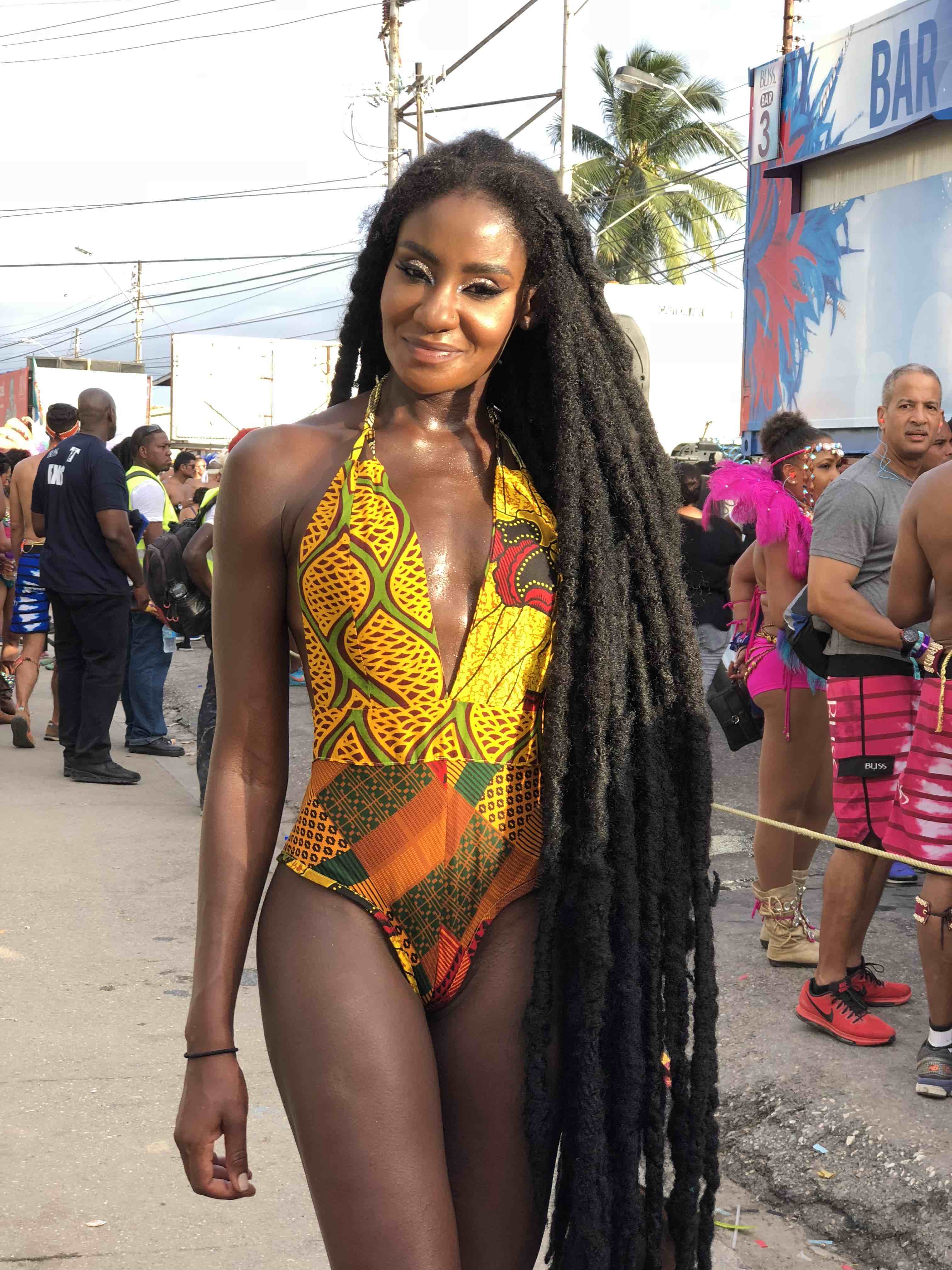 She literally stopped traffic on Carnival Monday with BLISS. Stunning! 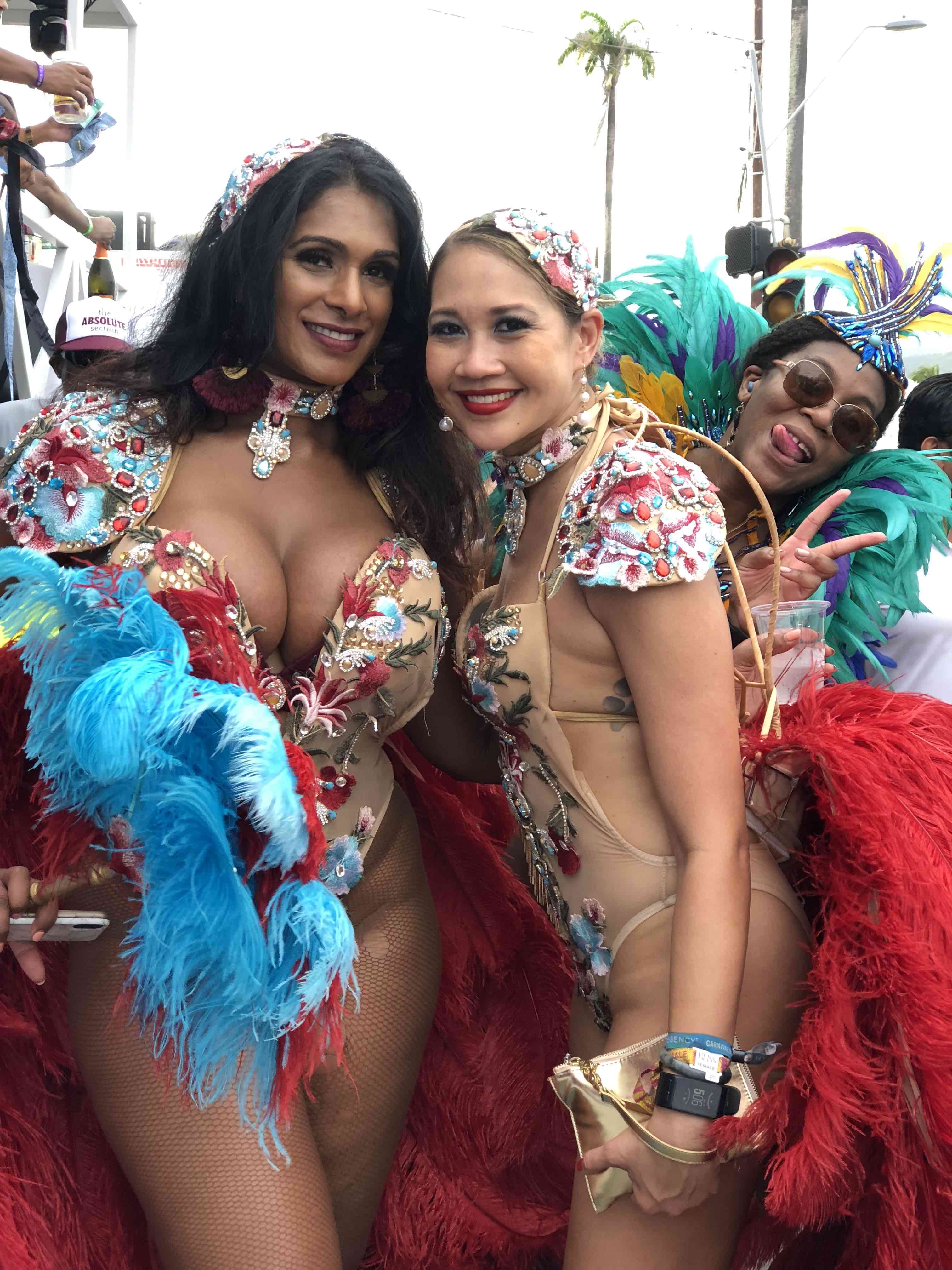 A true masquerader to her heart- she's played mas for over 10 years. 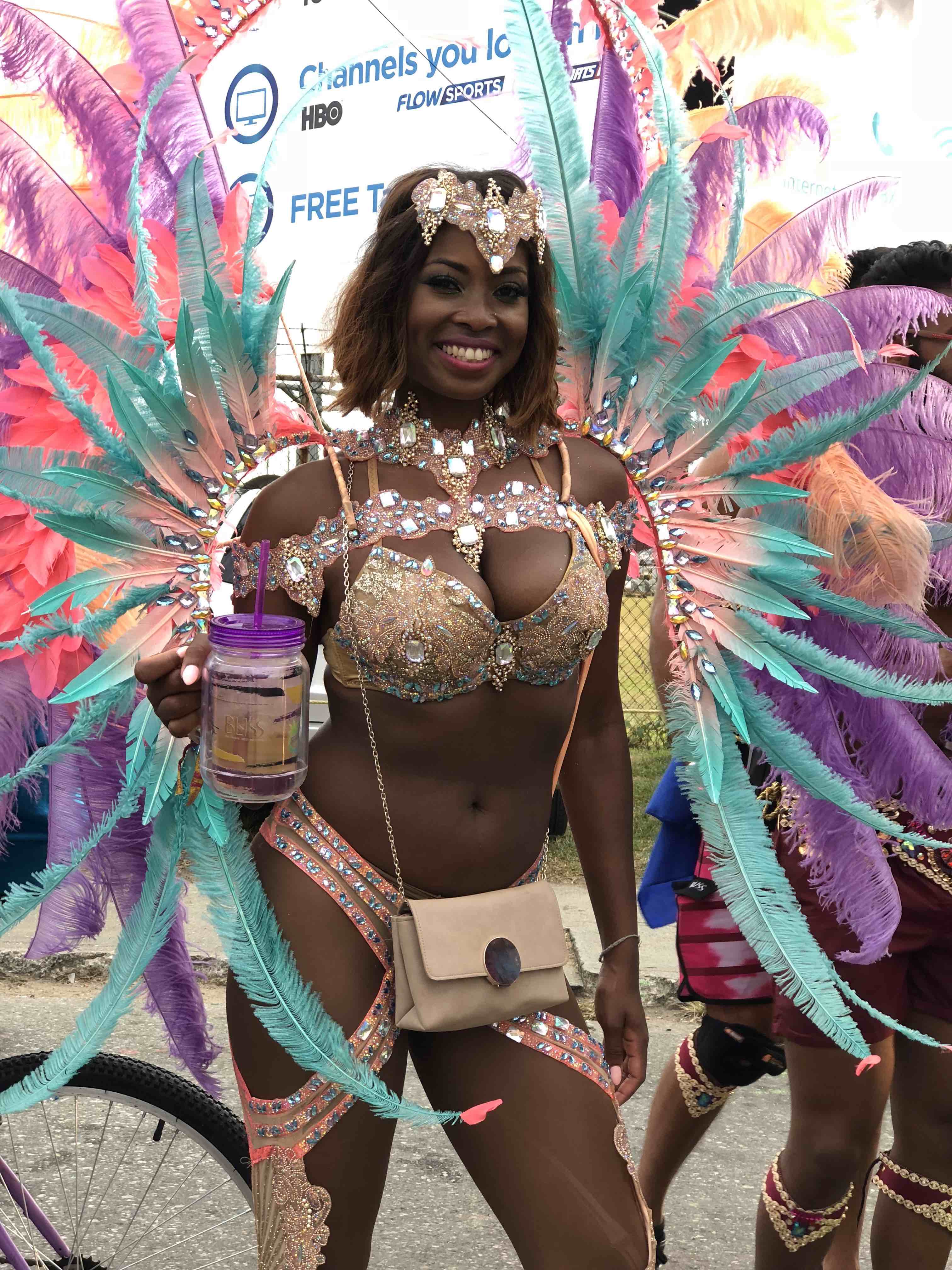 Designers Richard and Anthony spared no feathers and jewels this year and this young lady rocked them well. 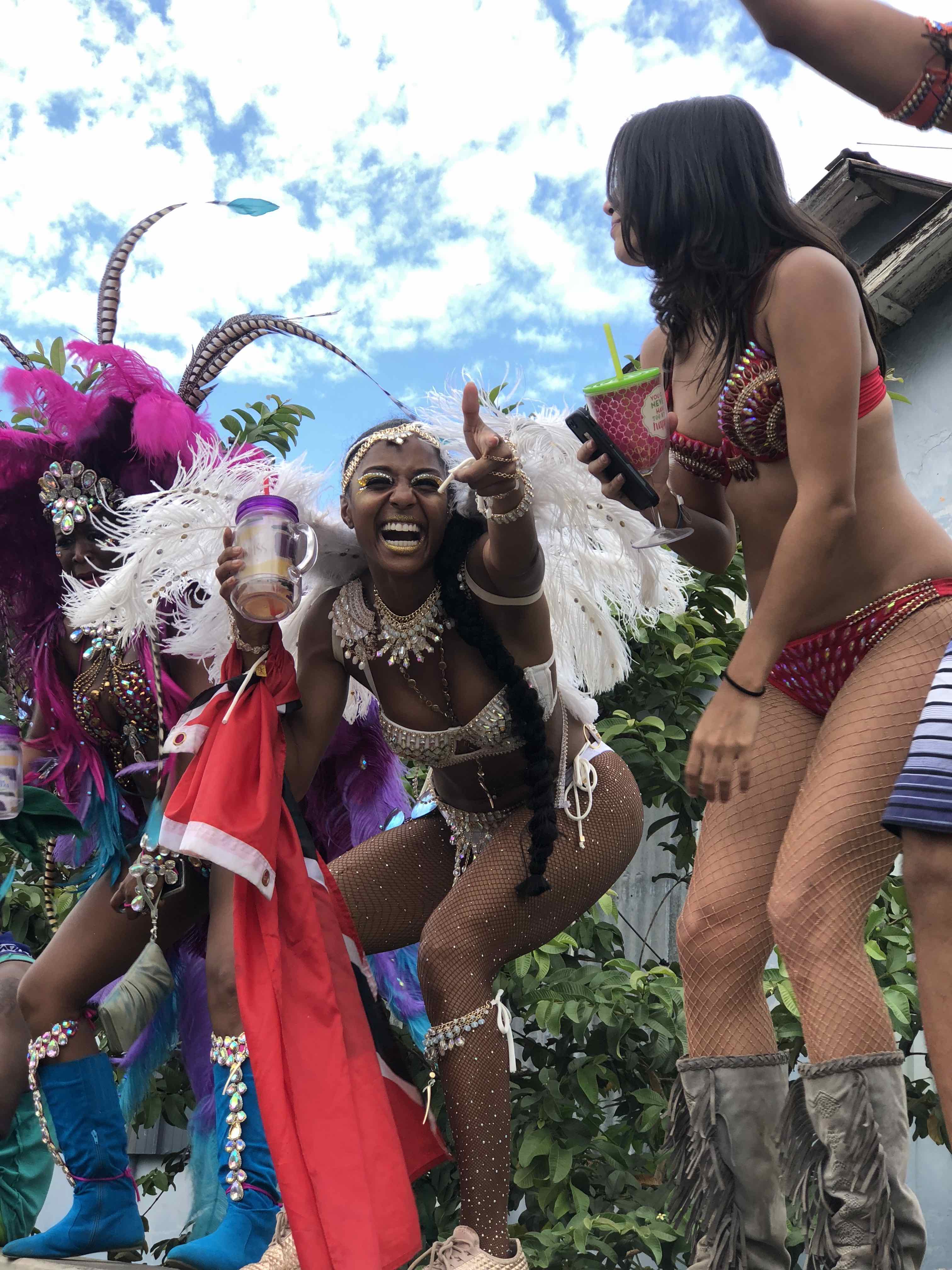 First time masquerader Crystal took to the wall of a neighborhood home in Woodbrooke to get on bad.

After playing Mas for several years with different bands, what I’ve come to realize is that carnival and Mas in particular is ALL ABOUT YOUR CREW! The BLISS/Tribe experience mastered by band leader Dean Ackin and his team delivers that all-inclusive feel that many crave and has become the gold standard in carnival Mas bands. Every detail has been coordinated so the only thing you need to worry about is locating the drinks truck for a top up of scotch and the rest stop for lunch. The many sections per band flock the side streets of St. James and Woodbrooke and Port of Spain where nearly every corner is littered with Masquereders making their mark, getting on bad and taking that wine down low.

The Gentlemen of Carnival also stopped the show.. Below, a small taste of the beautiful shades of male melanin on the road Carnival Tuesday. 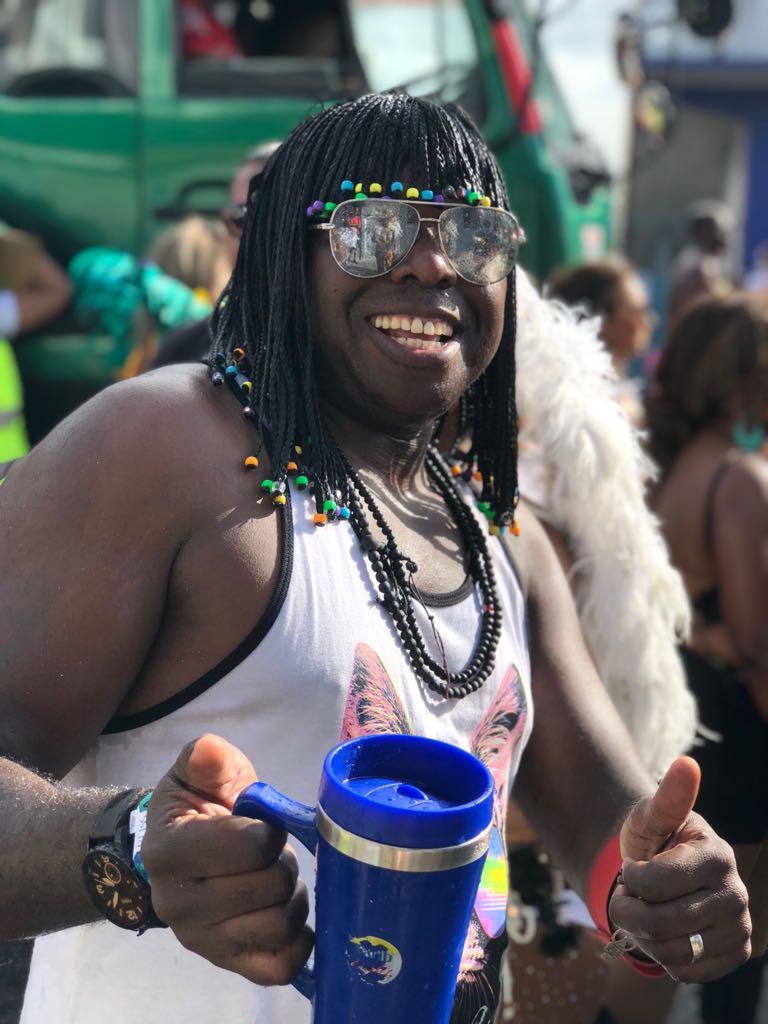 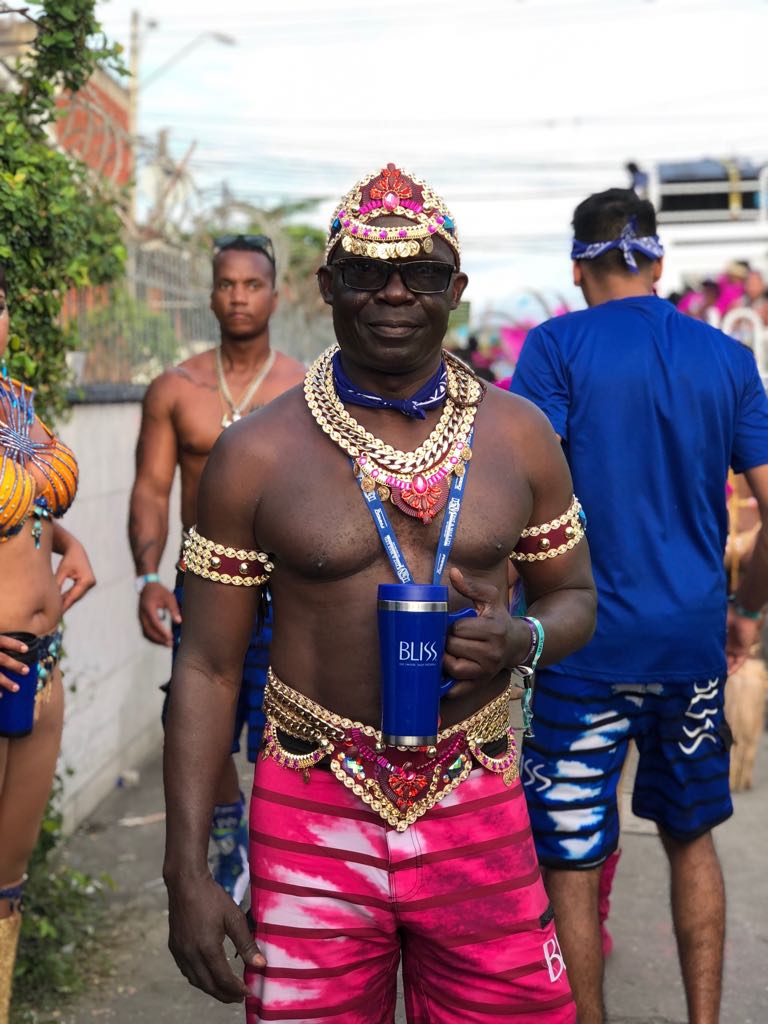 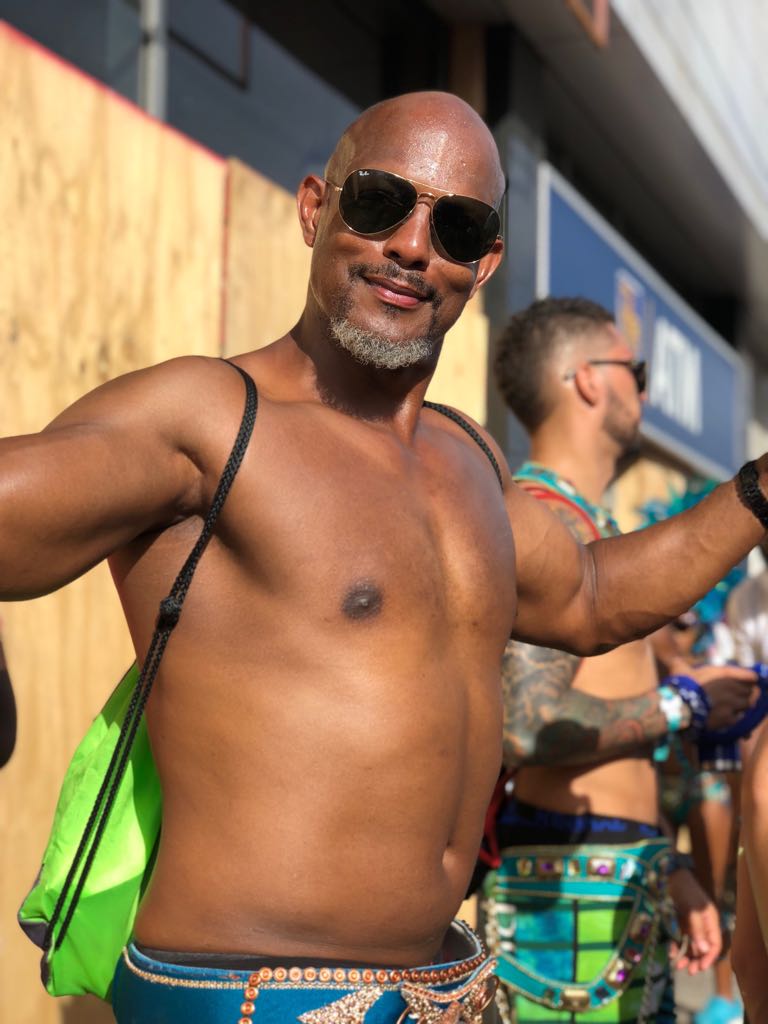 If I could change or edit one part of this year’s carnival experience with BLISS it would be that it wasn’t long enough. Two days simply that took so long to arrive literally flew by at lightening speed. Two days truly isn’t enough time after waiting an entire year to enjoy with friends. Luckily, as the carnival tradition continues, the preparation has already begun for another season and soon enough the time will come for us to take a jump once again. Let the planning for 2019 begin! 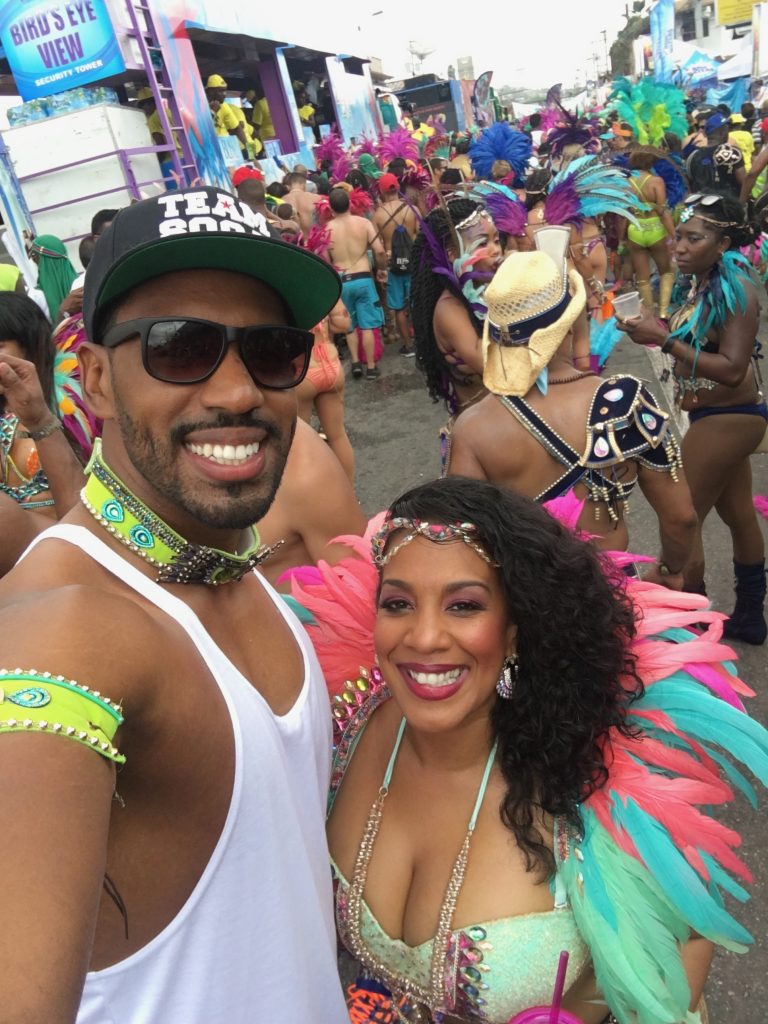 One of my favorite shots from BLISS in 2017.

Written by Vanessa James ~ All opinions are my own.

For a look at my carnival round-up article for Caribbean National Weekly, click here.

The United State of Women Summit.

Nice. It’s true. There is no quite feeling like crossing the stage. Can’t wait for 2019..

Awesome summary of cultural bliss in the Kingdom. Looking forward to the next chapter and making our footprint in those streets. Could eat ah doubles right now!

Finally deciding to solo travel it in 2019! Should be an adventure to the max no doubt!!! Thanks for your post

So welcome!! Glad you enjoyed the piece.. Cheers and happy travels!!

Thank you! Much appreciated. More to come! Stay close.