As a seasoned multimedia business owner, Vanessa is a champion of entrepreneurship and collaboration. She uses her vibrant voice and platform to promote diversity and inclusion in all areas of her brand. Vanessa is a bi-lingual triple threat and has been tapped by brands such as: JetBlue, AT&T, IHeartMedia, Macy’s, Palace Resorts Barbados Tourism Board and more to voice their campaigns,curate events, serve as a host and more.

At the heart of the VJMedia brand is collaboration and community. Vanessa and her talented team of creators is always ready to help clients on their new media projects, content creation, digital and social media plans and more. To book Vanessa or Team VJMedia for an upcoming campaign, fill out the form below.

Learn More
"Whether you’re a brand, VJMedia fan, or new to the site, my mission is simple:
to share my work, experiences and unique multi passionate perspective while creating impact. I'm so glad you’re here and I look forward to collaborating with you soon."
Vanessa James

Vanessa James Media, LLC is a comprehensive and interactive multimedia company that leverages its founder and CEO versatile array of talents and passions. After a decade in radio, where she wore various titles, including Program and Music Director as well as on-air personality, Vanessa’s grit and steadfast approach propelled her to launch VJMedia in 2010.

Often referred to as “the media talent to know with the voice to match”, the seasoned voiceover actress turned multi-passionate entrepreneur proudly serves as the voice of over forty radio stations as well as a host of national clients including her recent campaigns highlighting Serena Williams and Lebron James for ESPN’s 30 for 30 series as well as household brands like Zumba, The Miami Heat, JetBlue, Palace Resorts and more.

VJ as she’s widely known, also recently expanded her team and added producer and content curator to her portfolio of work as she visualized, crafted and produced several nationally recognized events including: Hispanicize where she served as the events Music Director along with her own three events: The VJMedia Mixology™, Women of Impact Dinner Series, and the most recent Food, Wine and Fete all-inclusive experience. The three VJMedia signature events marry Vanessa’s passions of connection, collaboration and elevation of both fellow female entrepreneurs and multicultural creatives.

Through her cultural contributions to outlets such as Essence Magazine, USA Today, 10 Best, The Miami Herald, Café Mocha Radio Network and more, the media maven in the making is also on a mission to amplify the Caribbean diaspora through her stories and voices through her writing.

To learn more about the VJMedia brand, click below. 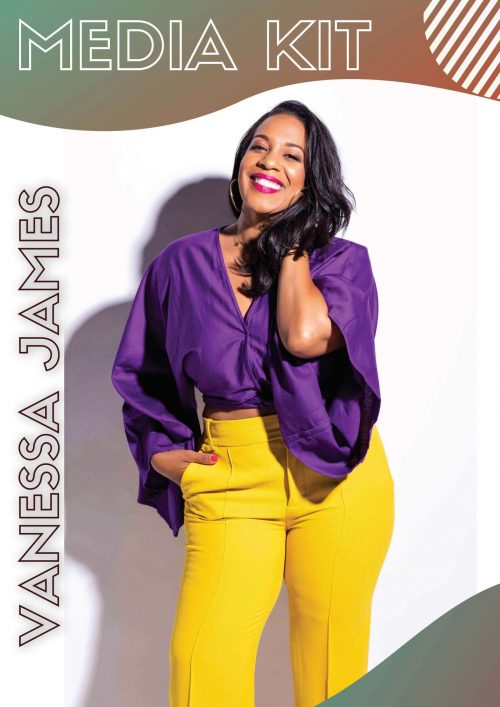 For your next campaign

If you are interested in working with me or have an opportunity that you feel would be a great fit, feel free to send me an email hello@vanessajamesmedia.com.